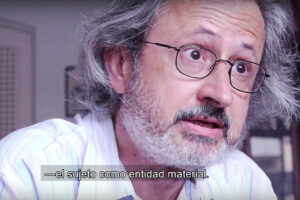 The animist cosmologies and the materialist thought of Félix Guattari offer a conception of subjectivity that serves as an antidote to the blind spots of the Western paradigm. According to these frameworks, the subject is not a prerogative of the Anthropos, it does not constitute an immutable essence endowed with transcendental rational and moral consciousness that separates it from non-human life, and it does not depend on the logic of recognition that limits it to preformed individuals. On the contrary, the subject is defined as a material, transversal, procedural, embodied and situated entity that includes the human, the animals, the plants, the environment and the planet. There are no pre-constituted subjects but pre-individual, pre-linguistic, collective and polyphonic subjectivation relationships in perpetual emergence, which maintain all kinds of ethical, aesthetic and political relationships with multiple others. For Guattari, not only is subjectivity machinic (productive, creative, irreducible, transformative, contingent) but so is the work of art, because the experimentation of affects and percepts is capable of producing a singular, heterogeneous and relational existence. Starting from the video essay Assemblages: Research Interviews, sociologist and philosopher Maurizio Lazzarato, the artist Angela Melitopoulos, and a group of researchers in the humanities and social sciences will reflect on the main implications of this animist concept of subjectivity for the political imagination.

With the collaboration of the research group AGI (Art, Globalization, Interculturality), Department of Art History, University of Barcelona.