The ‘Other’ Beyond Multiculturalism : Art, Visuality & Interculturality

The ‘Other’ Beyond Multiculturalism : Art, Visuality & Interculturality 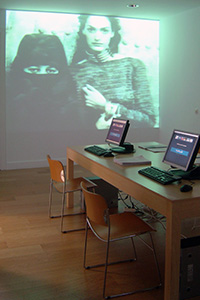 With this project I mean to explore an uncommon dimension of the Visual Studies: the interplays between Interculturality, Globalism and the Visual. I am also interested in examining how the artistic activities generated from different local and national contexts are organized in the heart of the contemporary global culture. A dimension that would be conceived as a ‘third way’ between Art History (and its limitations as an ethnocentric narrative) on the one hand and Cultural Studies (a movement in which what is visual has a small part or maybe none at all) on the other.

Apart from approaching the theoretical and epistemological aspects, this project revolves around “case studies”: the work of visual artists such as Antoni Muntadas, Santiago Sierra, Antoni Abad, Rogelio López Cuenca, Ursula Biemann, Ana Navarrete, Alícia Framis, Alexander Apóstol, Francesco Jodice, Hannah Collins, among others. These artists conceive what is cultural as a system of relationships of meaning through which it is possible to identify differences, contrasts and comparisons. They also perceive culture as a medium by which different groups establish communicational tools between the “I” and the “other”.

It is my purpose to use a cartography of the “other” by adopting an intercultural perspective in the sense of an articulation of differences and by connecting the minorities to the globalized networks beyond the American “multiculturalism”and what in Latin America is known as “pluralism”. The intercultural is maintained in a constant tension between what is local and what is global. There is also tension between the issues that seek the homogenization and those that look for an agreement among the tradition and the culture in all localities. It is by the grace of what is intercultural that national identities are located in a territory of cultural transfers and “crossed histories”.