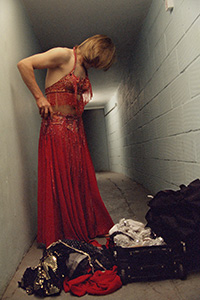 Gender questions are structural regardless of the country and of the culture, although some political nuances and differences have to be stressed. Up to now gender matters have been neglected when it comes to intercultural studies. Lack of attention is also significant when art is associated with gender and interculturalism. In the recent history of contemporary exhibitions, there is little talk about multiculturalism. It is even more scarce as far as exhibitions are concerned. Here are some examples: Les Magiciens de la terre, (1989) devised by Jean-Hubert Martín, The Decade Show. Frameworks of Identity in the 80´s (1990), the Whitney Biennale (1993), documenta XI, curated by Okwui Enwezor, the 2005 edition of the Venice Biennale and above all Global Feminisms (2007) Brooklyn Museum of Art, organized by Linda Nochlin y Maura Reilly. It is rather obvious that gender plays a fundamental role in all cultures, including those where the colonizing/colonized dichotomy exists. When gender is mentioned, feminism and queer issues have to be taken into account as well. For many years these concepts have been implemented according to western rules. It is time to change this.