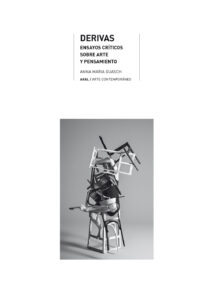 This book offers a reflection on art through its “dérives” or “drifts”, that is to say, the movements that nourish creation and that make all forms of expression possible in today’s art. Throughout its chapters the author not only considers creation itself but also the discipline of art history, its limits and the need to propose new methods and strategies of interpretation.

Knowledge is understood as an exchange between disciplines, both related and unrelated, instead of being encapsulated it in a single, delimited field. This reticular knowledge explains the aforementioned “drifts”, which, starting from a central nucleus revolving around the analysis of the theory and history of global art in the last two decades, branch out into multiple non-hierarchical visions that reflect the contexts in which they are generated and operate.

In short, this text develops a series of “lines of flight” that, starting from art criticism, Visual Studies, the concept of the archive or that of globalisation, both converge and diverge in search of a continuous movement and, ultimately, generate a common space from which we can recognise that the art conceived in our global present is as important as the way of analysing it, narrating it, communicating it and making it accessible to an active and participative audience.