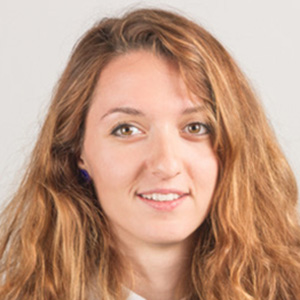 Manuela Valtchanova (Karlovo, Bulgaria, 1989) holds a Master of Sciences in Architecture by UACEG, Sofia, Bulgaria and TUM, Munich, Germany (2015). She is awarded with the prize for the best master thesis of the Department of Preservation of the Architectural Heritage of UACEG for her project Reversible Cities. Resocialization and reconstruction of the bomb shelters of the Civil War in Barcelona. In 2016, she finishes the Master of Ephemeral Architecture and Temporary Spaces at ELISAVA, Barcelona. Consequently, she initiates her academic practice in the same format as an assistant professor and a curator of the seminar action in space | space in action, which studies the interdisciplinary nature of the creative action as a generator of situations, environments and spaces. She has taken part also as an assistant professor and a tutor in several academic formats  (Llum BCN, Innovation Lab: ephemeral architecture for Primavera Sound, etc.), working on design strategies related to transformative urbanism, temporary spaces and interventions in the public space.

Since April 2018, she has been part of the ELISAVA Research team, in particular, of the Design & the City research group, directed by Dr. Roger Paez, where she is currently developing projects that deal with ephemeral architecture, operational cartography and social cohesion. Within this framework, in February 2019 she completes the project “Civic Placemaking: design, public space and social cohesion. Marianao Sant Boi de Llobregat.” in collaboration with ” la Caixa “Banking Foundation, whose main objective is to explore new urban regeneration formats that foster interculturality through research methodologies in design with a direct impact on public space in the contemporary city.

In her professional career, since 2012 she has collaborated in several architectural offices and presently, she is part of the team of Queralt Suau studio, which carries out projects that address heterogeneous architecture formats that vary between stage and exhibition spaces and interventions in the public space.

At the same time, since October 2018, she has started developing her PhD thesis under the direction of Dr. Martí Peran and the co-direction of Dr. Roger Paez studying the architecture of the action or the spatial practices of intersubjectivity, singularization and new temporalities in the lived spaces of the contemporary city.